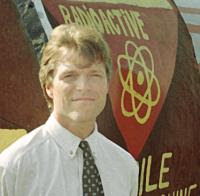 As reported at News.com.au:

Maybe word of the scrutiny has gotten out, or perhaps a different media outlet makes a difference, but Kevin Kamps’ tour of Australia is being covered a bit differently since he last popped up on the Nuclear Australia radar.
Mr. Kamps is no longer referred to as an expert, but a title I am much more comfortable with

“…a US anti-nuclear campaigner…”

That settled, let’s move on to what the man is reported to have said.

“…the public's primary concern should be where the governments planned to store nuclear waste.”

I agree. The disposition of waste (high, intermediate and low level) should be a principal focus area of any review. But let’s acknowledge these have been settled in other countries such, for example, as France, the UK, Japan, and Russia who are all involved in spent fuel recycling (reprocessing). Even within the USA, the GNEP initiative of early 2006 is working to similar ends with added goals of further minimising proliferation risk.

“US experience showed reactors, generally located near cities, had been forced to store toxic waste while the argument of where to build a national dump continued.”

American nuclear reactors produced up to 30 metric tonnes of waste each year, which posed serious health and environmental risks.

Nuclear power is still a very contentious issue in the US with most people asking where do we put the waste.

If reactors are built, they will serve as waste storage sites for many years in the future and there is a massive risk for accidents.”

Again, I agree that many reactors have commenced interim spent fuel storage. But these sites must undergo rigorous regulatory approval processes, design scrutiny and evaluations, tests, etc. See my post on cask testing. The interim casks undergo similar tests. Furthermore, from the perspective of security, Nuclear sites already have hardened security and physical protection programmes and infrastructure allowing for some economies of scale (even more so for multi-unit sites). Therefore I can see no justification for the statement on ‘massive risk for accidents’ based on interim, on-site spent fuel storage.

Mr Kamps pointed to the Yucca Mountain proposed dump in Nevada that had now been delayed as a groundswell of opposition grew.

He said nearby residents and environmentalists did not want the dump because of the site's location on a fault line, near drinking water supplies and on volcanic land.

He argued that the same problem would happen in Australia if nuclear energy was developed.

Many lessons are being learned from efforts to develop geologic repositories around the world. Just like any other technology, these lessons will be folded into future programmes. It is reasonable to believe that future endeavours will be significantly more streamlined compared to those that came before.

“The creation of a nuclear power industry to decrease emissions trades one ecological disaster for another.

Where is the ecological disaster from nuclear power? I can’t put it much better than SA Labour MP - Tom Kenyon.

Kamps goes on to say

The government should concentrate on improving energy efficiency and renewable energies to solve global warning.”

Again, I agree. But a participating role from nuclear power should be given a fair go.
Posted by Ed
Email ThisBlogThis!Share to TwitterShare to FacebookShare to Pinterest
at 12:12 am