USA: celebration and pause for reflection 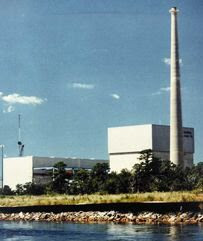 Oyster Creek - Lacey Township, New Jersay- USA
Of the 104 operating nuclear power plants in America, only three were connected to the Grid in 1969: R. E. Ginna, Nine Mile Point - 1, and Oyster Creek. All plants connected before that year [most of them much smaller demonstration facilities] have since permanently shutdown. Of those three, only two received their full commercial operating license within that year: the two GE BWR's [boiling water reactors] - twin plants in fact - Nine Mile and Oyster Creek. Both licenses are listed in the PRIS website as having been issued on December 1, 1969. However, Oyster Creek was connected to the grid in September and Nine Mile in November. This makes Oyster Creek the oldest operating nuclear plant in the USA. Worldwide, only two operating gas cooled reactors in the UK are older.

1969 is a significant year in the USA for many reasons [something about an Eagle landing, etc.*]. With respect to nuclear power, '69 has relevance because operating licenses issued to US nuclear power plants extend for 40 years. Many facilities have applied and received license extensions for an additional 20 years. Nine Mile and Ginna already received their extensions, but Oyster Creek's application was aggressively fought by local environmental groups and some notable celebrities [literally, a cause célèbre]. But the technical review of all issues has concluded the plant remains safe and last week the Oyster Creek application was approved by the NRC, paving the way for another 20 years of operation. Congratulations are in order to the staff who operate and maintain the facility as well as the original engineering design and construction teams.

According to the NRC webpage [and assuming my math is correct], the number of approved license extensions is 51. Updating that page for Oyster Creek, will bump the total to 52 units - exactly half of the current US operating fleet.

But that's not all. Oyster Creek is now part of Exelon. However, way back when, Oyster Creek was the responsibility of Jersey Central Power and Light [JCP&L] - a part of General Public Utilities [GPU]. Another company within GPU was Metropolitan Edison or Met.Ed. Met. Ed. also worked to deploy nuclear power plants, but instead of electing for the GE BWR, went to B&W for a PWR [pressurised water reactor]. They located their two units on a decent size island in the middle of the Susquahanna River in south-central Pennsylvania; a three mile long island to be precise.

The Three Mile Island Unit II accident occurred 30 years ago last week [March 28, 1979]. No deaths or injuries directly resulted from the accident, but the resulting hysteria - fanned by an uninformed and sometimes blood thirsty media - did harm some people. The financial impact to Met. Ed. and GPU was much more significant. GPU's stock plunged to pennies per share. A spin off company, GPU Nuclear, was created to manage the nuclear assets including the Unit II cleanup, Unit I restart and of course ongoing operation of Oyster Creek [itself challenged as resources were diverted to TMI]. An in progress project to construct a sister plant to Oyster Creek on the same site in the state of New Jersey was cancelled in the wake of GPU's financial meltdown. The accident had effects on other nuclear projects and existing plants throughout America and beyond.

Those who claim nuclear plant employees, their managers, or owners purposefully and irresponsibly accept safety related risks for the sake of profit are ignoring the significant lessons learned from the TMI-II accident.

While a financial disaster, technically the plant's safety systems performed to perfection. Had it not been for erroneous plant operator intervention, even the financial consequences would have been nil. The facility would have very probably been easily restarted. During the event, control room operators purposefully isolated emergency cooling water - that the protection systems had automatically started - due to the operator's misinterpretation of a single indicator on the control room panel. But even DESPITE this action - the luxury of hindsight reveals that this was in fact about the WORST possible action to take given the true scenario - [I'll say it again] DESPITE this action, the multiple redundant, multi-barrier protection systems performed their function to protect the surrounding environment and population by controlling and containing the resulting mess. Credit must also go to the engineers and operators within the organisation. Once the above indicator was cross-checked against other indications [at the rear of the operating panel], the subsequent actions were well managed; courageously managed is probably more accurate. We should all ask ourselves if we would have the guts to do it. But I doubt their confidence was derived from some 'battler's bravado'. They knew the plant's technical capabilities and in particular those of the safety systems. They were informed by frequent contamination surveys and omnipresent radiation monitoring.

As Patric Moore has said, from the prospective of nuclear safety, the Three Mile Island Unit-II accident was and remains a phenomenal success, a testament to Western nuclear engineering design, construction and enduring quality.

I doubt there are many, but to all those who have worked for GPU, GPU Nuclear, then AmerGen and now Exelon over this entire time period - congratulations, well done and enjoy your well deserved retirement.

* Just as there were two fully commercial nuclear power plants licensed in 1969, there were also two moonshots. Both Apollo 11 and 12 took place in 1969.
Posted by Ed
Email ThisBlogThis!Share to TwitterShare to FacebookShare to Pinterest
at 4:14 pm 0 comments