Best to keep your expectations low for now.

Think about it. These guys have just been hit by a double-whammy. First an earthquake that has to be close to what the plant was designed to withstand, if not beyond. And then a tsunami that takes their station to blackout conditions. I'm confident they have emergency procedures to deal with this situation - not this specific chain of events, but their symptoms. Symptom based emergency procedures have been around for many years. The approach was developed by the industry as a lesson learned from the Three Mile Island accident in 1979.

In a symptom based approach, a limited number of key parameters are monitored and controlled, without the need to determine the exact details of the event. For example, reactor level and containment pressure are two key parameters. Falling reactor level could result in inadequate reactor fuel cooling, so a prioritized list of means to add cooling water to the reactor are developed and incorporated into emergency procedures. Typically, the last item on the list is to change the plant piping alignment such that the fire suppression system can be used (via connections outside the reactor) to pump 'raw' water (in this case sea water) directly into the reactor. Given the station blackout conditions, this action would be expected if cooling water inventory were required to maintain reactor water level.

Similarly, containment pressure can not be permitted to get too high. So periodic, planned and controlled pressure releases are implemented to manager that parameter. This could involve some radiation release, so part of the planning involves the precautionary evacuation of local residents.

But my main point is that the Emergency Response team is obviously VERY busy dealing with the immediate situation. And while the general public is desperate for information - which they rightly deserve. There are others who have a greater need for the information and communication channels to manage their responsibilities. These include the first-line decision makers at the reactor site, regulatory authorities, local and national emergency management agencies, local and national government agencies, the plant designer, and international support agencies. Information must be verified and any conflicts resolved quickly to permit decision makers to take timely action to protect the public to the best of their ability. These communicators are among the most busy people trying to manage the situation and the importance of them getting it right can not be overstated.

Those in the best position to communicate with the public (government offices for example) are also furthest from the detailed information flowing within the plant and have to manage many other, non-nuclear relief and recovery operations in the aftermath of the earthquake. Therefore, their statements tend to be quite brief, never speculative, and typically lack details of 'what happened'. The 'what happened' will be determined later - the plant operators are not concerned about determining this as a priority now. They are busy managing the symptoms and critical safety parameters, not being driven to describe events of the past.
Posted by Nuclear Australia
Email ThisBlogThis!Share to TwitterShare to FacebookShare to Pinterest
at 6:22 pm 37 comments 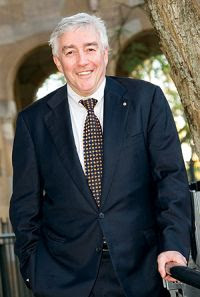 Source: University of Queensland
Posted by Nuclear Australia
Email ThisBlogThis!Share to TwitterShare to FacebookShare to Pinterest
at 4:13 pm 9 comments

Dr Eric Knight, a research associate at the ANU's centre for climate economics and policy and at the University of Oxford, believes Julia Gillard’s current proposal needs a bit of tweaking though. Specifically he’s calling for some detail on how to distribute the collected revenue as well as Australia’s consideration of Nuclear Energy.

Specifically Knight’s proposing a form of ‘dividend’ known as a tax shift. Instead of a check returned to each Australian as proposed by Hansen, Knight proposes to reduce income taxes. The idea of a tax shift is to tax the thing you want less of (such as cigarettes or carbon in this case) and reward what you want more of (i.e. work contributing to Australia’s GDP).

Knight did not provide any detail as to how the income tax cuts would be distributed – but it seems complex to my non-economist brain. Per Hansen’s scheme the difference in your pocket is purely a function of your contribution to carbon emissions. A tax shift has to consider varying tax rates as well as how to deal with the unemployed, disabled and/or pensioners.

The critical point being the return of tax revenue to the people—not the polluters. The effect on their profits can be best managed by phasing in the price on carbon.

Other scientist who support a carbon tax may be found at the Carbon Tax Center. Their list of supporters—just in the USA alone—includes Public Officials, Scientists and Economists, Opinion Leaders, Corporate (Editorials), and other Authors, Writers and Pundits.

Just some of the Scientists and Economists include (in addition to Hansen of course):

Follow the link above to read brief statements, references and other specific background material regarding each individual's support of a revenue neutral carbon tax (i.e. tax and dividend) approach to atmospheric CO2 reduction.

Jeffrey Sachs, Economist and director of the Earth Institute at Columbia University

Edwin L. Glaeser, Professor of Economics at Harvard University and director of the Rappaport Institute for Greater Boston

Paul Portney, Dean, Eller College of Management, Univ. of Arizona (and president, Resources for the Future, 1995-2005)

Herman E. Daly, professor in the School of Public Policy at the University of Maryland, foremost U.S. ecological economist, author of Ecological Economics, Steady-State Economics, Valuing The Earth, among other works

Edward Snyder, dean of the University of Chicago’s Graduate School of Business

in reference to: Row Over Carbon Tax (view on Google Sidewiki)
Posted by Nuclear Australia
Email ThisBlogThis!Share to TwitterShare to FacebookShare to Pinterest
at 9:56 pm 3 comments

Hansen's Eerie Forecast: one year on

AUSTRALIA will suffer if fossil fuel use continues unabated. Climate extremes will increase. Poleward expansion of the subtropics will make Australia often hotter and drier, with stronger droughts and hotter fires, as the jet stream retreats southward.

But when ocean temperature patterns bring rain, the warmer air will dump much more water, causing damaging floods. Storms will become more devastating as the ice sheets on Antarctica and Greenland begin to disintegrate and cool the neighbouring ocean, as I describe in [my book] Storms of My Grandchildren. Ice discharge from Antarctica has already doubled in the past five years.

Those who focus on short term profit, the retention of material wealth and work to kill a carbon tax approach to atmospheric CO2 reduction will likely be proven to be penny-wise, pound foolish - assuming you don't believe they are already.

Those who seek to capitalize on a carbon tax for the sake of special government programs, pose a similar risk to our collective future and that of our children and grandchildren.

in reference to: Only a carbon tax and nuclear power can save us The Australian (view on Google Sidewiki)
Posted by Nuclear Australia
Email ThisBlogThis!Share to TwitterShare to FacebookShare to Pinterest
at 4:29 pm 0 comments

Note the contributor is affiliated with the Institute of Public Affairs. Per their website, they are: an independent, non-profit public policy think tank, dedicated to preserving and strengthening the foundations of economic and political freedom. Our author, Alan Moran is Director of the IPA's Deregulation Unit, is an economist who has made a specialty of regulatory matters, in particular covering energy, global warming, housing, transport, and competition issues. I don’t know about you, but in my universe, global warming and deregulation are unacceptable bedfellows.

Just to pick a bit of the low hanging fruit…

If the tax were to be applied to all the 550 million tonnes a year of carbon dioxide emitted by Australia, at $25 it would raise a cool $13.8 billion, equivalent to a quarter of the sum raised by the GST.

Divided into equal shares for all Australian adults (with half shares for up to 2 kids per household) as recommended by Prof. James Hansen—means that single Australians receive about $675 per year, couples $1,350 and families with two or more children would receive $2,025. This would more than cover the costs to households as forecast by the author. With cash in their pockets (and a cash incentive in their minds) people just might alter their habits for the sake of extra cash even the future.

Now imagine how much would flow into our pockets if all the fossil fuels mined in Australia for export were also taxed at this level…. Solar hot water and rainwater retention systems for all???

Sure, some of that export business may go elsewhere, but not all. Australia is not unique in its need to cut atmospheric CO2 concentrations. If we dare to lead, others will follow. And I predict it will happen a LOT faster than the naysayers at The Institute of Public Affairs would have us believe.

Immense storms have been known to change the course of mighty rivers in a day. If fossil fuel's profit potential is moved to other energy technologies, the money—very similar to water—will quickly change course to flow in the path of least resistance.

in reference to: Consumers and business will feel the pain of emissions tax (view on Google Sidewiki)
Posted by Nuclear Australia
Email ThisBlogThis!Share to TwitterShare to FacebookShare to Pinterest
at 10:47 pm 1 comments