Reuters is reporting the approval.
Heathgate Resources has been give approval to produce up to 1,500 tonnes of uranium oxide per year.

"I am satisfied that the tough conditions attached to this approval will ensure the highest standards of environmental management by the mine operator."

Heathgate is working to obtain approval to mine the Four Mile deposit sometime next year.
Posted by Ed
Email ThisBlogThis!Share to TwitterShare to FacebookShare to Pinterest
at 9:03 pm 0 comments

In Western Australia, Premier Alan Carpenter has promised to initiate legislation to ban the mining of Uranium if reelected. He is reported to have claimed that "most of the world is moving away from nuclear power".

That claim is not supported by:

The proposed legislation has been criticised by WA business groups as well as traditional owners.

Also in the news is a report that the Construction Forestry Mining Energy Union will soon launch an ad campaign with the slogan, "Nuclear power will kill the coal industry."

First, in this radio interview [hat tip to Luke Weston], Dr. Ziggy Switkowski clarifies that it is not reasonable to expect Australia to have its first nuclear reactor until shortly after 2020. [However, Macarthur Coal Ltd. Chief Executive Officer Nicole Hollows recently predicted 10 years.]

Also, most believe nuclear's potential role represents only a portion of Australia's total electricity generation capability and that with efficiency, conservation, wind, solar, geothermal and considerable development in carbon capture technology, our carbon emissions can be brought under control. As Ziggy Switkowski says, "This is not a zero sum gain".

Finally, the WNN article claims the union is fishing for support of a $1.5 Billion investment in clean coal currently being advocated by Labor and that raising the nuclear spectre will help keep Labor in power. This claim is supported by quotes from this article in the Business Spectator.

1 reactor in 10 to 15 years with up to another 24 in the 30 years that follow does not appear to be an industry breaking development. Particularly when one considers that most [nearly 2/3] of Australia's coal is exported. [According to Nationmaster, Australia's annual coal production is 338 million tonnes and our consumption is 131 million tonnes. Coal exports are expected to remain secure or increase into the foreseeable future.

Uranium mining in Queensland would tighten the labour market which would tend to increase wages.

With respect to the coal power generation industry, transition from a coal station to a nuclear station is not difficult for most skills. Operators, maintenance craft/trade workers and plant administrative staff perform very similar functions. ADD too this the need for licensing, documentation and security staff as well as greater technical/professional expertise to maintain critical systems to what is commonly regarded as 'nuclear grade', and it becomes apparent that a local nuclear plant provides more employment opportunities than a similarly sized fossil station.

Posted by Ed
Email ThisBlogThis!Share to TwitterShare to FacebookShare to Pinterest
at 4:07 am 9 comments

It may not quite be a debate, but the two sides are talking about nuclear at the same time.

As I posted yesterday, Ian Macfarlane has joined an increasing number of Australian leaders in calling for a rational discussion of nuclear's power's role in any credible emissions reduction [and economy salvaging] energy technology deployment strategy.

A brief recap of the past six months or so
From Australia's political right, MacFarlane was quickly joined by Nelson.

"Our view is that there needs to be consideration in Australia given to the development of a nuclear power industry."

Also on the right are Julie Bishop and let's not forget the National's vote in support of nuclear technologies back in June. Rounding out Coalition support, the WA opposition urged discussion and consideration of nuclear power back in February.

Looking left, the very first outspoken pro-nuke on my radar following the election was Paul Howes in early February this year. Howes was later joined by Carr as well as Commonwealth Bank chairman John Schube [who also chairs the Great Barrier Reef Foundation]. This was followed of course by Bob Hawke last month.

In the centre we have the Australian coal industry, Marcarthur CEO] Nicole Hollows, forecasting a Nuclear Australia in 10 years. There's also a plea to consider the technology from WA's Chamber of Commerce and Industry.

Meanwhile, they are circling the wagons in Canberra - all three of them. Consider what Garrett had to say:

"The last election showed that Australians are absolutely of one mind about not having 25 nuclear power plants dotted around their suburbs and in and around their cities.''

Really? I thought the last election was about the ratification of Kyoto, Australia's thirst for action over excuses and our passionate desire for decisive leadership to cut Australian emissions and cut them relatively fast. I thought is was also about WorkChoices, education and health care. Did some people vote solely on the potential of a Nuclear Australia? Possibly, but Garrett seems to be getting a bit emotive on the subject.

Elsewhere, Garrett's replaying his favourite song and dance - the back-flip accusation. Again? It seems the Labor strategy is pretty clear. Have Garrett play the attack dog with respect to nuclear, while Wong strives to focus on an undefinable strategy based principally on renewables. But, by all means keep them as separate as possible.

"Are they really saying that they have a plan for 25 nuclear reactors in Australia? Where are they going to put them?''

[Ah, beg your pardon Ms. Wong, don't forget the recent announcement of yet another coal station required to satisfy increasing demand. I should also note that per the OECD International Energy Agency, fossil fuel based electricity generation in Australia from January to May 2008 INCREASED 5% from the previous year. This happened despite a 4.8% increase in hydro based generation and a 35% increase in electricity generation from all other renewables. - Thanks to Luke for this. Here is objective data that while renewables are good, they simply do not pack the punch required to keep even with increasing demand let alone facilitate credible reductions.]

I say 'sadly' due to the unproductive [and very political] duplicity in Wong's mini-soundbites. Of the numerous reports, studies and plans issued of late by the current government, none scratch the surface with respect to quantifiable technology deployment necessary to achieve even significant [let alone adequate] emission reductions while preserving Australia's broader economic viability.

Our emissions are going up and they are stalling.

No Engineer with a functioning nuron would propose the location of a nuclear power plant within Australia's interior - there's simply no significant demand there, let alone very little water. Many of today's nuclear power plants are cooled using sea water. That leaves our [very large] coast. The plants are typically near, but obviously not 'in' large industrial or population areas. This is not a technically complicated issue.

The 'location' discussion is an irrelevant political diversion, designed only to invoke the politics of fear.
The recent news report mentions nuclear power's tendency to split both parties like a proverbial U-235 atom. It also includes a statement from Nelson that I have emphasised in this blog countless times:

Dr Nelson said a nuclear industry would get off the ground only if both the coalition and Labor backed it.

He offered to talk with the government about it.

Considering the recap above, it looks as if we are moving slowly closer to a consensus among and between the major political camps. I look forward to further discussions and hope all partys work to identify common ground. Whether it's jobs, industrial security, low cost energy, emissions mitigation, or reliability of supply; there seems to be considerable common interest with respect to nuclear power.

I remain confident our thought horoizon extends beyond the next election and hope to see some tangible action well before it.
Posted by Ed
Email ThisBlogThis!Share to TwitterShare to FacebookShare to Pinterest
at 9:20 pm 3 comments

Expanding support for a Nuclear Australia

Industry
Last week the Sydney Morning Herald reported a call for a "rational and sensible debate" on "the energy option that dares not speak its name: nuclear". This call came from Western Australia's principal business lobby group, the Chamber of Commerce and Industry.

"I have never seen a credible scenario for reducing emissions that did not include nuclear energy."

Nuclear power will be 'inevitable'' in the next decade because solar and wind power wouldn't be able to replace coal-fired power, the Review said, citing Hollows. She said it was the 'elephant in the room' in the current debate on emissions trading and reducing carbon pollution, the newspaper reported.
Posted by Ed
Email ThisBlogThis!Share to TwitterShare to FacebookShare to Pinterest
at 4:12 am 0 comments 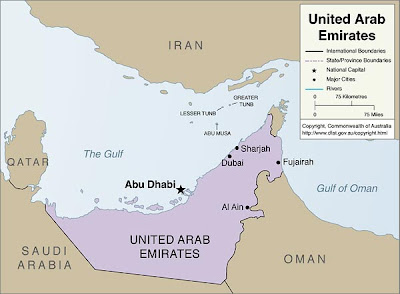 Reuters is reporting a call for bids to manage the United Arab Emirates' nuclear power programme. The world's fifth largest oil exporter is coming up short in electricity generation requiring an additional 22 gigawatts within the next 7 years. That's the equivalent of 22 large nuclear plants [less than 15 of the really big AREVA EPRs].

I am inferring [as I believe the authors intended me to] that nuclear power is being considered for some of the 22 GWe needed in the next 7 years. I would say that from their current state, even commissioning one plant in that time would be impressive project management to say the least. But one does not have to be in project work for long to learn that given enough money, just about anything is possible. [I'm not talking about payoffs and corruption here but instead: resource allocation, experience/skill acquisition and the expediting of supply.]

Rumour has it, the UAE has a bit of cash on hand. For example, they recently contributed US $10 million to the IAEA for an international nuclear fuel bank. With Iran on its doorstep, no doubt they are distancing themselves ideologically from Iran's rogue-nuclear-state image by going completely the opposite direction with respect to fuel supply.

So why blog here about the UAE? Well for starters they are behind Australia with respect to existing nuclear infrastructure. The article linked above mentions their need to develop several key prerequisites to an eventual nuclear power industry - not just an independent regulatory body, but even the "laws to govern the sector". Australia has got nuclear related legislation and a regulator already. No doubt the laws would need revising and the regulator may require additional resources - but we've also got some experience in this area. Enjoying our own resource boom, Australia has the money to make things happen if really needed.

Finally, one of the companies that may bid on the job is Australia's own WorleyParsons Ltd. Should WorleyParsons win the job, the resulting experience could serve Australia well.

One of many interesting watch-areas within the nuclear industry.
Posted by Ed
Email ThisBlogThis!Share to TwitterShare to FacebookShare to Pinterest
at 5:26 pm 2 comments

Dr Ziggy Switkowski, chairman of the Australian Nuclear Science and Technology Organisation (ANSTO) will address the official launch of ANA Queensland on August 21 in Brisbane. Dr Switkowski's topic: Is the climate right for nuclear power?

With Australians' demand for electricity, and energy in general, expected to double by 2050, Dr Switkowski says he believes the safest, cleanest and lowest cost form of electricity in a carbon-constrained world will be nuclear power.

The ANA is urging supporters of nuclear science and technology in other states to form similar branch organisations.

For further information on the activities of the group please contact the organisation via Email at info@anaq.org.au.
Posted by Ed
Email ThisBlogThis!Share to TwitterShare to FacebookShare to Pinterest
at 5:51 am 0 comments