Some tables, trends and projections. The bottom line:
A collection of data
Regarding nuclear energy's projected future role:

(NB, this role increases in the 450 scenario. Any aspirations to achieve 350 ppm without nuclear are beyond my comprehension.)

First, what is the energy related contribution for anthropogenic (people-produced) greenhouse-gas emissions, now and in the future? This would include electricity, home heating, automobiles, industry, etc. Anything that involves heating, moving, illuminating, charging, computing, projecting, etc.. In the below table, you can see that energy is by far the largest contributor. Here, everything has been levelised to CO2 equivalent to make it easily digested. 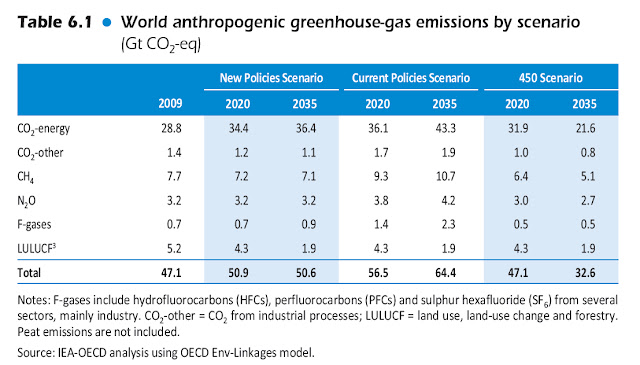 Next, a representation of the 'Current Policies', 'New Policies' and '450' Scenarios. In the 450 Scenario, global cooperation and action maintain global atmospheric CO2 concentrations at or below 450 ppm. The vast majority of peer-reviewed scientists agree maintaining this objective is critical to avoiding widespread environmental disaster. A significant number are arguing for 350 ppm. [NB at the moment we're at 389 and climbing.] 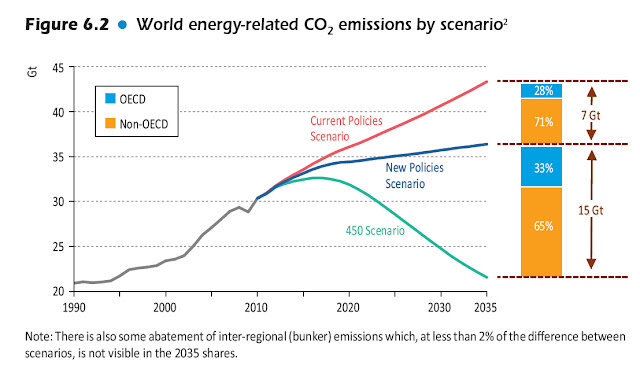 Now the obvious quesiton; "Can't renewables get us there?" According to the OECD, the New Policies Scenario depends heavily on the expanded deployment of renewables. 7,000 TWh more annual, renewables-based generation by 2035. That is a large number, roughly equal to generation produced by 900 1,000 MW nuclear or coal stations. Considering the low capacity factor for wind and solar, the number of installations to be built is equal to at least 1.35 million 2MWe wind turbines - about one every ten minutes worldwide on average - from now to 2035. But not all of this will be wind; solar, hydro and others will have to generate their share. Global hydro and non-hydro generation in 2009 was 3,902 TWh. That value will have to more than tripple in less than 25 years. Considering the expected lifetime of the facilities (Wind and Solar ~ 20 years per the report), the required construction effort grows further still to compensate for the retirement of older facilities.

The challenge grows further still to achieve the 450 scenario. 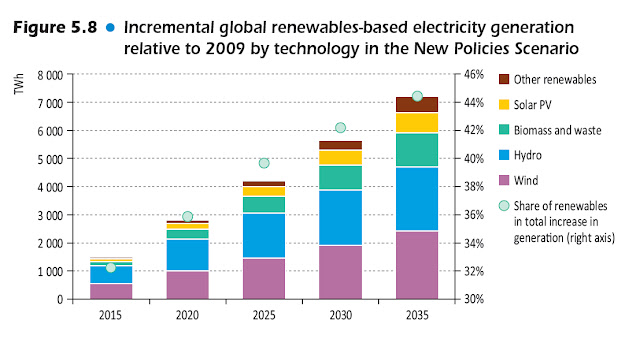 We will certainly have to improve on our demonstrated performance over the past decade. The increase in generation by fuel type between 2000 and 2010 is shown below. If we are trying to reduce the dependence on fossil fuels, I would say the data below supports an argument that renewables and nuclear must work together to achieve any credible goal. At the moment, efforts to position renewables against nuclear in environmental or public policy debates seem to be contributing to the on-gong expansion of fossil fuel - worst of all, coal. 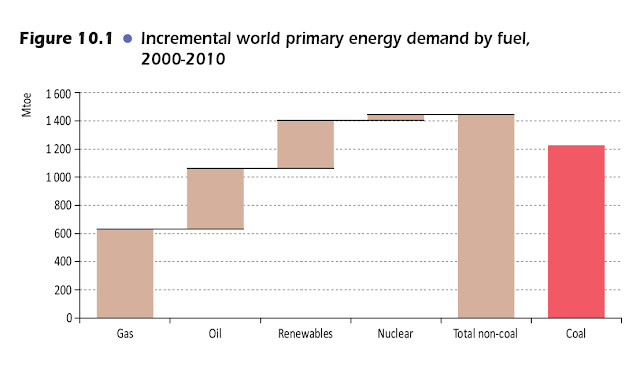 So, how do we get there? What is the projected share for each? OECD's projection is shown below. [NB - Note the '2009 fuel mix' line at the top (aka business as usual scenario) will result in the near doubling of global emissions by 2035. If you doubt this, remember that just a few weeks ago, data was released citing record breaking, projection shattering, global emissions.]

The challenge grows further still to achieve the 450 scenario. 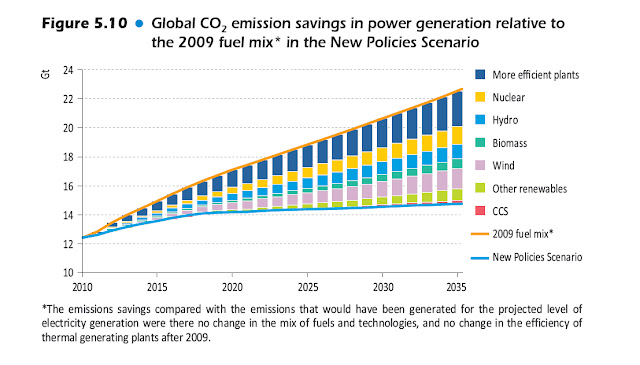 The below table quantifies the above graph. 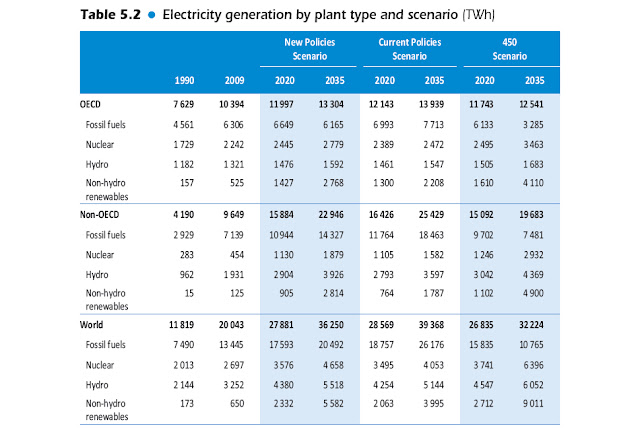 So, can nuclear do it? The below graph is not new. To satisfy the 'New Policies' data in the table above, about 250 new 1,000 MWe plants will be required by 2035, that is about 10 per year or one every seven weeks. Looking at the statistics on the front page of the IAEA PRIS Database, this seems do-able. Five units were brought into service already in 2011, five in 2010 and the trend of project starts has been increasing over the past several years. Technically, this is a realistic goal. However, just like renewable-based expansion, retired plants must be replaced to achieve the required generation of 4,053 TWh. Still, this is not out of our reach.

The challenge grows further still to achieve the 450 scenario. (about 470 more plants) 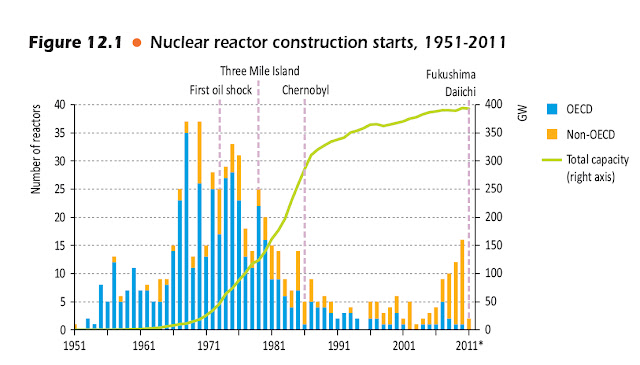 The OECD conveniently considers the net effect by including retirements in a chart. 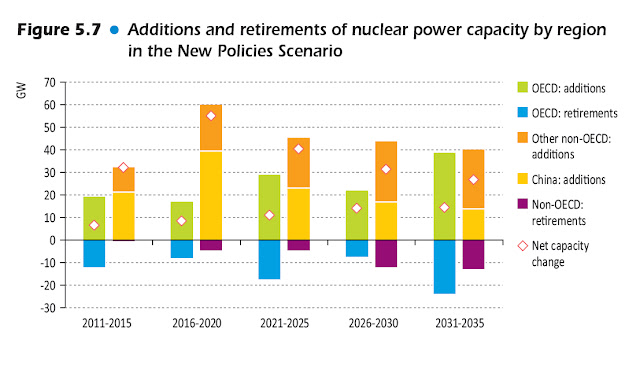 One final, dirty and embarrassing factoid from the report. Below are data on coal exports. Coal export capacities (how much can be exported) and utilisation rate (what percentage of that total is exported) by country. Australia's capacity tops the list. Looking at the second table, you can see we are the 3rd busiest (behind Colombia and Canada, whose capacities are about an order of magnitude below our own). This puts Australia in the top (worst) position. Australia's performance in this regard is expected to further degrade (coal exports to expand) for at least the next 5 years.

And the industry is worried about job security? Sadly not nearly as much as they should be. We can do better.

Their level of discomfort should grow further still to achieve the 450 scenario. 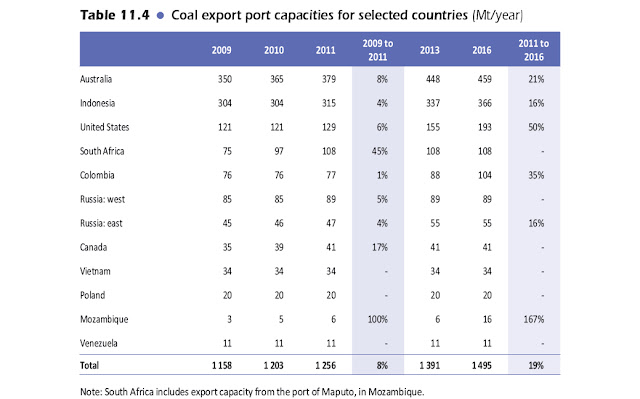 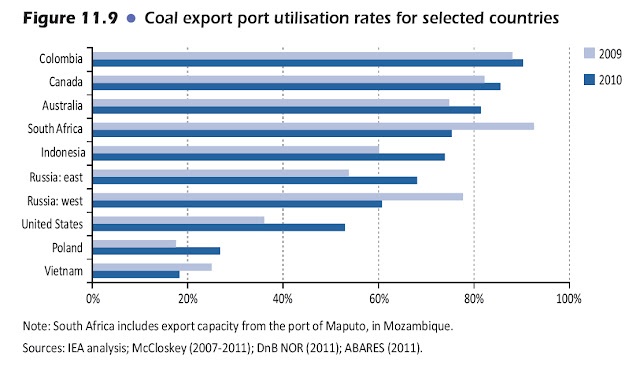 Posted by Nuclear Australia
Email ThisBlogThis!Share to TwitterShare to FacebookShare to Pinterest
at 1:04 am