Some key components of training in any nuclear energy facility I've ever been in (and principal lessons learned from the Three Mile Island accident) are the concepts of redundant indication, conservative decision making and maintaining a questioning attitude. 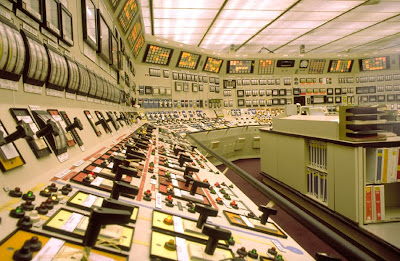 Nuclear Energy Station - Control Console and Panels
Redundant Indication
Nuclear Operators will seek multiple, independent sources of information before taking action. This is basic stuff, nuclear operations 101. One of the first simulator scenarios of any training program:
The objective? Develop operators who constantly verify the equipment status via multiple readings while maintaining the big picture of the integrated plant. Any current or ex-operator will be yawning if they haven't already moved on to another webpage.
So today, a big, red light went on before me... but this one's not the first. Compare my quote from James Hansen's book 'Storms of My Grandchildren' found in this post with the information found in this press release from the World Health Organization. Some quotes from the latter:

"WHO estimates more than 2 million people die every year from breathing in tiny particles present in indoor and outdoor air pollution."

"In both developed and developing countries, the largest contributors to urban outdoor air pollution include motor transport, small-scale manufacturers and other industries, burning of biomass and coal for cooking and heating, as well as coal-fired power plants. Residential wood and coal burning for space heating is an important contributor to air pollution, especially in rural areas during colder months."

2 million gone per year. Roughly the population of Australia, dead every decade. And this is independent from the treats stemming from Climate Change.
Just this year: tens of $billions lost as a result of the Queensland floods; a budget impasse in America threatens to shut their government down, in part due to repeated, weather related, disaster relief expenses; icons of environmental science continue their calls for the immediate and significant reduction of fossil fuel emissions... For naught but the price of 2 million+ per year.
Shameful
Posted by Nuclear Australia
Email ThisBlogThis!Share to TwitterShare to FacebookShare to Pinterest
at 5:04 am 0 comments

Australian Energy and Resources Minister Martin Ferguson and leading players from the LNG and coal industries have converged on Japan in recent weeks to promote Australia's wealth of resource projects as medium and long-term sources of extra energy.

In an interview with The Australian in Tokyo, Ferguson describes the present conditions as a "once in a lifetime" opportunity for Australia's LNG, coal and coal-seam gas producers.

The International Energy Agency and Australia's peak commodities forecaster, the Bureau of Resource and Energy Economics, have spoken of a "golden age" or "revolution" for the LNG industry, predicting Australia will soon become the second largest supplier behind Qatar.

Whether Japan does or does not fully phase out its nuclear programme is yet to be seen. But it should be clear that any move in that direction would mean a greater reliance on fossil fuels. And there we will be, smack in the middle of it.

Dangerous and just a bit embarrassing [for whatever that's worth]. Profit at any price with little - if any - regard for environmental stewardship. I know, I know, "Japan's energy sources are Japan's sovereign decisions to make. If Australia doesn't sell energy to Japan - be it uranium or fossil fuel based - someone else will." Right?

Not completely; at least not to me. Within Australia, some good arguments have been made for not selling uranium to countries that may pose nuclear security and/or proliferation risks, even though in some cases 'someone else does'. Australia's decision to take the moral high ground on uranium lies in stark contrast to our fossil-based lust for the Japanese energy market.

Tell me again... why is the carbon tax so vital?

Posted by Nuclear Australia
Email ThisBlogThis!Share to TwitterShare to FacebookShare to Pinterest
at 1:44 pm 2 comments

One of the worst accidents ever in the country's energy sector

At least 61 people were killed earlier today - no, not as a result of the explosion at the French waste processing facility being splashed all over everywhere - but in Kenya, after a gasoline pipeline exploded.
My thoughts and sympathy go out - equally to both the Kenyans and the French - to the injured, their families, and of course to the friends and families of those who were killed.
Just thought you'd like to know.
Posted by Nuclear Australia
Email ThisBlogThis!Share to TwitterShare to FacebookShare to Pinterest
at 4:38 am 2 comments

A climate change skeptic for a Nuclear Australia

Terry Krieg, retired secondary school teacher of geography and geology from Port Lincoln, South Australia was recently interviewed for the ABC's Ockham's Razor. Terry describes himself as a climate skeptic but begrudgingly accepts the worldwide decisions and trends toward emissions reduction.

The teacher's done some homework and concluded the right path, the logical path, the only path, for Australia must include nuclear energy.

Currently around the world sun and wind contribute just .6% of world energy total. And that's expected to reach 2.8% by 2030. US energy experts wrote solar off in the 1980s suggesting it would never deliver more than a fraction of their energy needs. They've been proved right despite some continuing research. Germany today presents a very disturbing and confusing picture. Solar subsidies in 2007/8 totaled $4.3 billion US and for just .7% of its electricity.

...Now with wind power the Danish experience is instructive. They have the most expensive power in the EU, have stopped building wind farms, have been unable to reduce their emissions and have now closed five turbine manufacturing plants with a loss of 3000 jobs.

How can these technologies ever enable the necessary reduction in emissions from electricity production - in Australia or anywhere else for that matter? As I've said before, if anyone believes it can be done without nuclear, please point to an example - just one, anywhere on the planet. [Not fair to include large-scale hydro countries... not an option for Australia.]

For the rest of the report, follow this link.

A September 2010 article in The Adelaide Review may also be of interest.
Posted by Nuclear Australia
Email ThisBlogThis!Share to TwitterShare to FacebookShare to Pinterest
at 4:28 am 0 comments