Seal the Deal - the UN Worldwide Campaign on Climate Change is an online information and petition campaign. 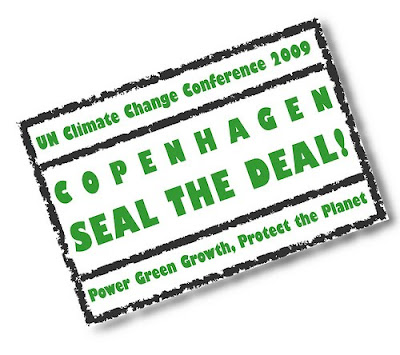 The UN-led Seal the Deal Campaign aims to galvanize political will and public support for reaching a comprehensive global climate agreement in Copenhagen in December.

Climate change affects us all. Nine out of every ten disasters recorded are now climate related. Rising temperatures and more frequent floods, droughts and storms affect millions of people’s lives. This is set against a backdrop of financial and food insecurity.

On December 7, governments will gather in Copenhagen, Denmark to respond to one of the greatest challenges facing humanity. The main question will be how protect the planet and create a green economy that will lead to long-term prosperity.

Reaching a deal by the time the meeting ends on December 18 will depend not only on complex political negotiations, but also on public pressure from around the globe.

The United Nations has launched “Seal the Deal” campaign that encourages users to sign an online, global petition which will be presented by civil society to governments of the world.

The petition will serve as a reminder that our leaders must negotiate a fair, balanced and effective agreement in Copenhagen, and that they must seal a deal to power green growth, protect our planet and build a more sustainable, prosperous global economy that will benefit all nations and people.

THERE IS NO TIME TO WASTE: STAMP YOUR VOTE AND SEAL THE DEAL!

Yesterday was the last day of Global Climate Week. With just over 70 days remaining, various organisations are working to build support through momentum and demonstrated consensus. If you have not done so already, please consider taking one minute to add your voice to the 65,000 plus who have done so already.

Want to do a bit more still?

Take a few more short minutes to forward the link to contacts, add it to your webpage, blog, or social network account.
Posted by Nuclear Australia
Email ThisBlogThis!Share to TwitterShare to FacebookShare to Pinterest
at 5:33 pm 1 comments

Can nuclear power plants be expected to load follow?

In the spring / summer of 2003 FirstEnergy, a utility in the US State of Ohio, was supposed to trim trees away from high voltage transmission lines, but failed to do so. In the afternoon of 14-August, demand (or load) began to rise sharply on the electrical grid. The high voltage wires became heated and sagged into the untrimmed trees, initiating a sequence of events that resulted in the shutdown of more than 100 power plants, loss of electrical service for 55 million customers in the US and Canada, and spread so quickly that it took an international investigative panel 6 months to issue a findings report. (before / after satellite photos)

The delicate balance of generation and load on an electricity grid continuously fluctuates, often significantly and on varying timescales as industrial and household demands ebb and flow throughout a day, a week, or a season. Generation must adapt where and when required. Morning and evening demand swings generally occur over a few hours; but there are also significant plant trips to deal with (well over 1000 MWe in a single instance). Without getting into a discussion of ‘operating’ and ‘spinning’ reserve, it is evident that utilities have developed plans to account for a number of potential scenarios - the case above notwithstanding.

Utility operators can vary the electrical output from some power plants quickly to adjust total generation to total demand. Hydro power is an example. In generation mode the water falls through a turbine generating electricity. In nearly all cases, power can be quickly changed by reducing or increasing the amount of water passing through the turbine. Some hydro stations can work in reverse; taking power from the grid to pump the water back up into a reservoir. Demand can be added by increasing the pump speed or total number of pumps in operation. Such facilities give operators the flexibility to manipulate either side of the load / generation balance. This mode of operation is referred to as load following.

A load following generator’s principal attribute is responsiveness. With respect to nuclear power plants (NPPs), responsiveness of currently available light water reactors (LWRs) is challenged by neutron poisons – in particular the isotope xenon-135 (xenon). Xenon is a powerful thermal neutron absorber (poison) and will capture neutrons otherwise available for fission of the reactor fuel. It is produced directly and indirectly from fission in all reactors.

Xenon production and removal in thermal reactors has been well understood for decades [1]. However, nonlinearities related to the xenon equilibrium equation challenge the control of power swings required to support a load following mode of operation. Xenon transients have the negative impact of significant reactivity addition or removal over the time periods required by many load following scenarios (i.e. periods of several hours). The operational challenge of an in-progress xenon transient is further exacerbated by increasing or decreasing reactor power as the terms of the xenon equilibrium equation are each impacted by neutron flux (reactor power level) to varying degree.

The neutron flux or power level of a reactor determines the production rate of xenon, iodine and tellurium (xenon precursors) as well as the xenon burn up. Xenon decay and tellurium / iodine decay into xenon are purely time dependent but are constrained by different half lives. Xenon concentration will reach equilibrium after a period of steady state operation or shutdown; in the later case following an initial spike in concentration due to the decay of the remaining iodine and zeroing of the xenon burn up term following the shutdown. Xenon equilibrium is not directly proportional to reactor power level. For example, the equilibrium concentration at 25% power is more than half the equilibrium concentration at 100%.

Reactivity is the parameter used to measure and control reactor power changes. As a simple analogy, reactivity to a core is like heat to a kettle full of water. Assuming the core is already critical, adding reactivity increases power (neutron flux) just as adding heat to a kettle increases the water’s temperature inside.

Withdrawing control rods increases core reactivity. As a poison, xenon absorbs neutrons and therefore reduces core reactivity with increasing concentration. Xenon transients challenge reactor operation due to continuously changing reactivity addition or withdrawal depending on the nature of the power history and attempted manoeuvre. For example, consider a reactor start-up about one day after a reactor trip from full power where xenon concentration had been at equilibrium. At the time of start-up, xenon concentration would have already peaked from the decay of iodine in the fuel at the time of the trip. The concentration would be decreasing steadily (adding positive reactivity to the core). This is not a safety concern since the control and safety rods add more than enough negative reactivity to maintain the reactor in a safe shutdown condition.

Post trip Xenon-135 transient [1]
As the reactor start-up progresses, the remaining xenon continues to decay but the concentration reduction is accelerated by the increasing reactor power’s impact on the xenon burn-up term of the equilibrium equation. As xenon concentration is reduced, positive reactivity is added to the core (equally accelerated). Operators must closely monitor core reactivity and take any required mitigating action to ensure the reactor is not shutdown automatically by reactor protection systems designed to limit the rate of power increase. Adding to this challenge, many reactor designs and license commitments require discrete hold points during power manoeuvres to calibrate instruments, perform reactor physics checks, synchronise the generator to the grid and perform other tests or surveillances.

Alternatively, if power is quickly reduced from 100 to 50% the resulting xenon spike, due to reduced burn up but continued iodine decay, will add negative reactivity for several hours and then reverse, adding positive reactivity as a new equilibrium is approached. As with the start-up example above, close operator monitoring and adjustment are required to ensure plant control remains within acceptable parameters. 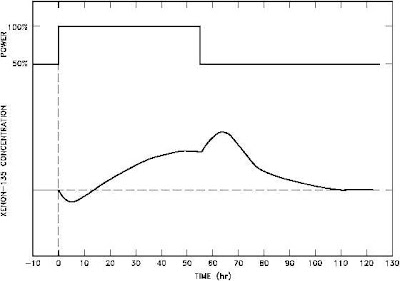 Xenon-135 transients from power changes between 50 - 100% [1]
Returning to load following, the time periods, frequency of adjustment and response time required are in direct conflict with the nature of xenon transients at NPPs. For this reason, most NPP operators choose not to subject their facilities to load following operating modes.

Other economic realities further dissuade NPP operators from subjecting their facilities to load following manoeuvres. The principal financial outlay for an NPP’s lifecycle costs is the initial capital expenditure of construction. NPP operation is typically not sensitive to fuel price. Contrary to hydro plants that are able to store sometimes scarce water for peak periods or fossil stations subject to high fuel costs, NPPs do not benefit from fuel cost savings by reducing power. NPP revenue is typically directly linked to generation. Therefore the economic case for NPPs is strongest as a base-load facility, operated at 100% power.

The designs of core fuel loading for operating cycles are planned well in advance and based on assumed fuel burn-up over several fuel cycles (typically 1 to 2 years per cycle for PWRs and BWRs with any given fuel assembly remaining in the core for 3 or more cycles). Load following operating modes would add another layer of complication and financial risk to this planning.

The economic interests of reactor design and supply organisations favour a marketable, load following design. If a load following NPP can be made available, additional nuclear generation share can be justified for a given electrical distribution grid. However, currently available designs continue to be constrained by xenon transients and the economic business case for nuclear power.

Modern designs have incorporated technology improvements to mitigate many operational challenges, such as the reduction or elimination of the hold points described above, ability to complete anticipated maintenance tasks at full power and core designs with strong neutronic coupling [2]. These improvements simplify operations during power reductions for unplanned maintenance activities and are highly desirable regardless of an operator’s willingness to load follow.

Potential for advanced and fast reactors

Xenon is a poison for thermal (slow) neutrons only. Therefore as fast reactor systems are deployed in the coming decades, the operational challenge from xenon will no longer be relevant.

Economic and other fuel cycle challenges are currently being assessed for fast reactor design concepts [3].

The World Nuclear Association is optimistic in this area. [4][5] The WNA's Ian Hore-Lacy contributed to the Encyclopedia of the Earth. His submission explains in some detail how advanced reactor designs will better accommodate load following.

Despite the challenges identified above, operators in France - with its high nuclear share of electricity generation - do elect to load follow [6].

I was able to find a few posts (one, two) by Rod Adams (Atomic Insights) that mention the topic. Also thanks to Edwad Kee below for this post by Joe Romm at The Energy Collective / Climate Progress.
Posted by Nuclear Australia
Email ThisBlogThis!Share to TwitterShare to FacebookShare to Pinterest
at 11:40 pm 11 comments