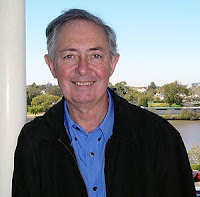 Prof. Ian Lowe
Photo from ABC
In a piece for the Courier Mail, Ian Lowe vilifies nuclear power; but offers in it’s place the same hollow promises for a totally sustainable and purely renewable utopia.

Professor Lowe, doesn’t include many numbers in his essay, but what sort of message is delivered if we remove all the rhetoric and focus on the data that he – as “emeritus professor of science, technology and society at Griffith University and president of the Australian Conservation Foundation” – has laboured to compile?

Here’s what we get:

“We have known for more than 20 years that burning coal, oil and gas is changing the global climate.” [What?! - you mean some other administration was involved??]

“…it would take about 15 years to build one nuclear power station if we started today.”

“…dotting 25 nuclear power stations all over the landscape, would only slow the growth in greenhouse pollution by less than 20 per cent. The science shows we need to make serious cuts, 60-90 per cent by 2050…”

He is also critical of uranium mining’s economical benefit, but sadly ignores the volume of emissions displace by that uranium (which is enormous even after mining, processing and transport are factored in).

So, what have we here? Look closely how the article and even the numbers are spun.

While it’s probably reasonable to assume the population will increase, efficiency improvements and conservation may work to stabilize the growth [although this is probably a bad assumption based on recent experience i.e. our consumption will probably be higher and I am being overly optimistic with respect to efficiency and conservation, but let’s go with it for now].

To check my assumptions, let’s multiply 25 GWe (about 25 nuclear plants at 1000 MWe each) times 365 days a year, 24 hours a day and apply a reasonable capacity factor of say 90%. That works out to be a tad over 197,000 GWh – so it looks as if my logic and assumptions are along the lines of the professor’s argument.

Now the statement on renewables in 2020.

According to the International Energy Agency, in 2004 Australia’s renewable energy generation was as follows:

So within 16 years [from 2004] we ‘could’ install the missing 57.5 GWe of renewable capacity? That’s the equivalent of… you guessed it, 57.5 large nuclear or coal power plants. Keep in mind that within Australia, hydro is all but fully exploited.

Going back to the IEA [Renewables Factsheet], by 2030:

Applying these factors within Australia [and being very kind in assuming we can get the job done here 10 years ahead of schedule] by multiplying them with the 2004 values above and holding hydro constant, gives a new total of 35400 GWh (about to 4.5 nuke plants operating as above). This falls well short of the 60 GWe necessary to arrive at the 25% of Australian power. In fact renewables look to be providing less than 2% of all Australian primary power by that time.

What a lot of people are saying is that the 25 nuclear plants could – by 2050 – do quite a job, maybe a bit less than a third of what is required to effectively manage emissions. Hopefully by then the renewables can pick up the rest with an installed and reliable capacity of perhaps another 50 GWe or so. But looking at the projections for renewables as well as their current contribution – I’m not confident in their ability.

But I fully support giving it one hell of a try – with a much needed helping hand from nuclear energy.
Posted by Ed
Email ThisBlogThis!Share to TwitterShare to FacebookShare to Pinterest
at 7:21 am