Per it's statute, The International Atomic Energy Agency (IAEA) has a single objective:

The Agency shall seek to accelerate and enlarge the contribution of atomic energy to peace, health and prosperity throughout the world. It shall ensure, so far as it is able, that assistance provided by it or at its request or under its supervision or control is not used in such a way as to further any military purpose. 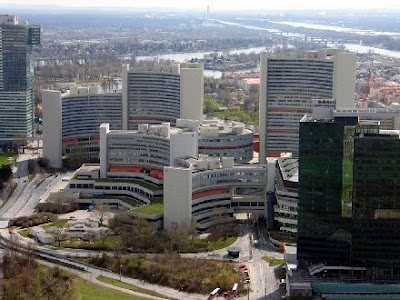 IAEA Headquarters - Vienna, Austria
A function or means to achieve this objective is the collection, collation and dissemination of relevant data. Items of interest include:

The Fast Reactor Database - as one would expect, but also including recent and upcoming meetings.

And there are many more.

It's important to consider the data in an integrated context. In isolation, they can be easily misinterpreted - or worse, misrepresented. For example, the PESS site shows China at the very bottom of the % nuclear share of total electrical generation (1.9%). However, looking at the PRIS entry page alone will quickly reveal that China's current nuclear build program is unparallelled: five project starts already in 2009 and six in 2008. That's quite a leap from only two project starts in both 2007 and 2006, one in 2005 and none in 2004.
Posted by Nuclear Australia
Email ThisBlogThis!Share to TwitterShare to FacebookShare to Pinterest
at 3:58 am